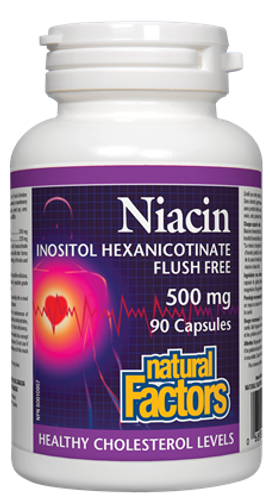 Natural Factors Niacin (Vitamin B3) 500 mg is a member of the water-soluble B complex family of vitamins. A factor in good health, niacin has many uses within the body such as assistance with the breakdown and utilization of carbohydrates, fats, and proteins. It also plays an important role in supporting cardiovascular health.

Niacin offers support for the cardiovascular system by having a positive effect on cholesterol levels by reducing LDL and triglycerides, while raising levels of HDL - the good cholesterol. Inositol by itself is also used therapeutically to reduce cholesterol.

Natural Factors Niacin Inositol Hexanicotinate Flush Free delivers niacin in the form of inositol hexanicotinate, which minimizes the side effects associated with other forms of niacin in high doses, such as flushing of the skin and upset stomach. When ingested, inositol nicotinate hydrolyzes in the body to free niacin and inositol, allowing both to function in reducing cholesterol levels in the body. It acts as a slow-release supply of niacin; hence, the flushing effect is not a likely event when ingested.